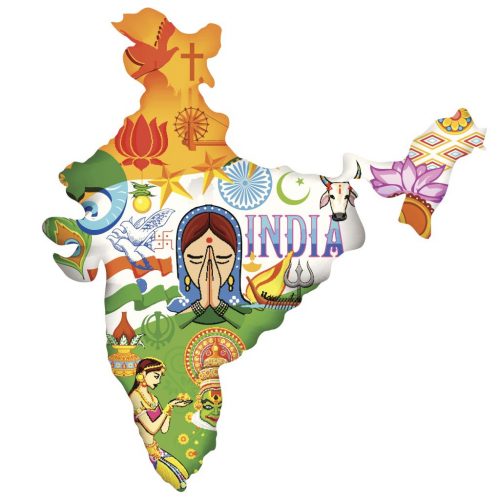 Mark Twain once famously said, “India is the cradle of the human race, the birthplace of human speech, the mother of history, grandmother of legend, and great grandmother of tradition. Our most valuable and most instructive materials in the history of man are treasured up in India only”.

If someone were to ask an Indian what the best description of India would be, the answer would always be the same, no matter which side of the Indian subcontinent the question is posed; A melting pot.

Different Cultures
A melting pot of different cultures that is the existential reality of the India of today. There is no country in the world with a population and culture as rich and diverse as that of India. Unity in diversity.

Religion
The Indian subcontinent is the birthplace of four of the major religions in the world – Hinduism, Jainism, Buddhism, Sikhism. The sheer number of religions practised in India is a testament to its multi-culturalism. Christianity and Islam are also widely practised in India. Close to 12 percent of India’s population practices Islam, while the Christian population of India is more than the total population of Australia!

Indian Cuisine
Here’s the best part, Indian cuisine is well known the world over. Several factors have contributed to the evolution of Indian cuisine, primary among them being religion. Mughal conquerors, who occupied India between the early 1500s and late 1600s infused India’s culinary tradition with Persian flavours and practices. The effect is notable in the use of cream and butter in sauces, the presence of meat and nuts in dishes, and specifically in dishes like biryani, samosas, and pulao, which draw heavily on Persian cuisine. While North India is synonymous with fluffy rotis and creamy paneer, the southern part of India is well known for its crunchy dosas and curries and stew-like dishes. The eastern part of India is famous for its’ desserts and seafood, whereas the Chinese and the Portuguese have influenced the food in the western part of India. Last but not least, let’s not forget about the lip-smacking Parsi cuisine. Thank you, Iran.

Music
The origins of Indian classical music can be traced to the Natya Shastra, a Sanskrit treatise on drama, which encompasses music as well. Two classical traditions are now recognised; Hindustani in north India and Carnatic in south India. However, a shining example of India’s diversity in music is MTV’s Coke Studio.

The show features artists from different parts of the country in every episode to fuse unexplored folk sounds with contemporary beats, thus appealing to the youth and adults alike. The first season of Coke Studio garnered 40 million TV viewers as well as 3 million YouTube views. The Prime Minister of India, Narendra Modi was also quoted as saying, “Indian music, whether it is classical, folk or filmy, has always worked for unity in the country by breaking all social barriers.”.

An Indian rupee note has the currency denomination written in 18 Indian languages.