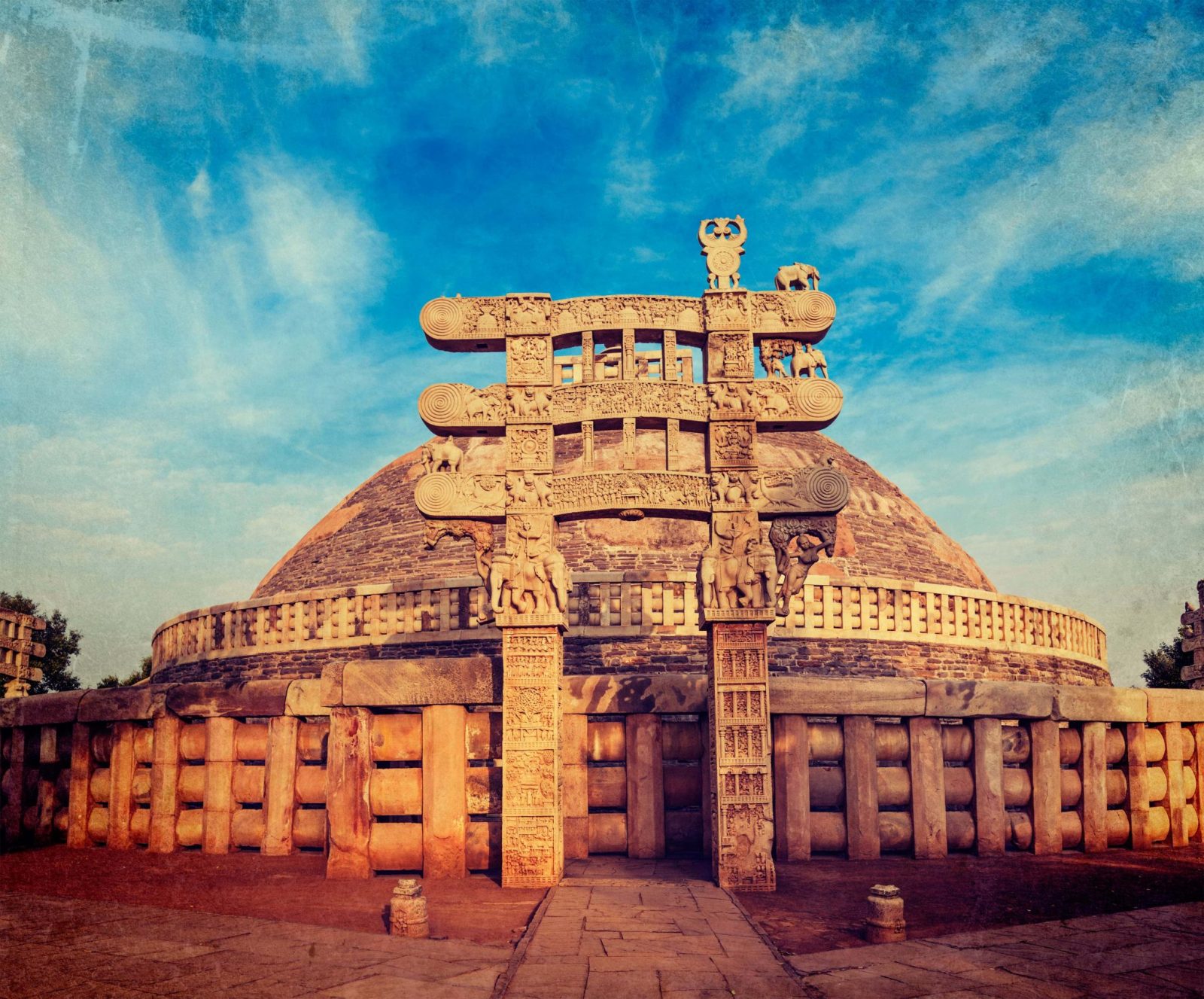 The Great Stupa is one of India’s most exceptional architectural wonders. The word ‘Stupa’ was derived from the Sanskrit root ‘Stu’ meaning ‘to worship’ or ‘to praise’.

A stupa is an architectural structure usually housing the cremated remains or possessions of prominent saintly figures. It is considered to be the structural emblem and the most important type of monument in Buddhism. An architectural descendant of the burial mound, the stupa is a brick and plaster hemisphere.

Enshrining a relic of the Buddha, it serves as the sacred centre around which rituals occur in an open-air setting. The relics of the Buddha were not merely considered a commemorative symbol by the Buddhist community; they were believed to be the living presence of the Buddha, a depository of his protective powers and living energy.

Perhaps the most famous stupa in the world is The Great Stupa at Sanchi, Madhya Pradesh. It is believed to be the oldest stone structure in India. This Stupa was authorised by Emperor Ashoka the Great in the 3rd century BCE. Interestingly, the Ashoka Pillar was also erected around the same time.

The Sanchi Stupa was built as a simple hemispherical stone structure with a ‘chatra’ to honour and shelter the relics of Buddha. Later, four ornamented gateways were added surrounding the Stupa. The present Stupa is twice the size of the original size of the Stupa that was built in the 3rd Century.

The waning of Buddhism brought in its wake the decline of Sanchi that lay abandoned for a considerable time, till it was brought to life in the year 1818 by General Taylor of the Bengali cavalry. In 1989 it was made a UNESCO World Heritage Site, and since then, it is among the most well conserved ancient Stupas of India.

Most stupas have a very distinctive semi-spherical shape, often surrounded by a fence. As Buddhism was introduced in different regions, the basic architectural features of stupas were transformed into a variety of shapes reflecting the artistic expressions of those cultures. The stupa was elaborated as Buddhism spread to other Asian countries, becoming, for example, the “chörten” of Tibet and the “pagoda” in East Asia.

Within India, the simple shape of the early Stupa evolved into the complex superstructure of later Hindu temples – rich in architectural ornament and often encrusted with sculptures of Hindu deities.

There are five types of stupas: the relic stupa, containing the remains of the Buddha and his disciples; the object stupa, containing objects that belonged to the Buddha or his disciples; the commemorative stupa, marking an event in the Buddha’s life; the symbolic stupa, representing aspects of Buddhist teachings; and the votive stupa, erected to make a dedication or to accumulate merit.

The Borobudur temple in Indonesia is the largest Stupa in the world.